The existence of the Library within the physical confines of what is now known as The University of the West Indies (UWI), St Augustine Campus began with the Imperial College of Tropical Agriculture (ICTA), which opened its doors on this site on October 16, 1922. The Alma Jordan Library (AJL), however, was officially opened on January 30, 1970. The building’s Golden Jubilee gave us the opportunity to celebrate our past and present dedicated employees, our achievements, and those we serve. Some major milestones of the library over the past decades are highlighted on the library’s website where our history is briefly chronicled. Throughout 2020 our celebrations included:

On January 10, 2020, an Interfaith Service was held at the library in recognition of the contributions of its present and former members of staff as well as other partners within the Campus community. Spiritual leaders from various faiths were on hand to offer prayers and blessings and to give thanks. Presiding at this service were Brahmacharini Akalka - Hindu spiritual teacher representing the Chinmaya Mission of Trinidad and Tobago, Pastor Dave Mohammed representing the Christian faith and Mr Yacoob Hosein, an AJL Senior Librarian, who represented the Muslim faith.

The AJL family has always been known for celebrating important events and milestones in fine style, and the 50th Anniversary was no exception. On January 31, 2020, The AJL family celebrated this very special occasion at Jaffa at the Oval restaurant, acknowledging the important role played by former and current staff members, other campus departments and scholarly publishers in facilitating the delivery of quality resources and services to the campus community over the decades. The luncheon celebration included representatives of the Guild of Students, The UWI’s Marketing and Communications Office, database vendor EBSCO Publishing, and retired Campus Librarians Ms. Jennifer Joseph and Professor Margaret Rouse-Jones and former Deputy Campus Librarians, Ms. Claudia De-Four and Ms. Maureen Henry. 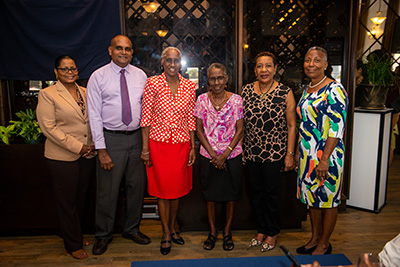 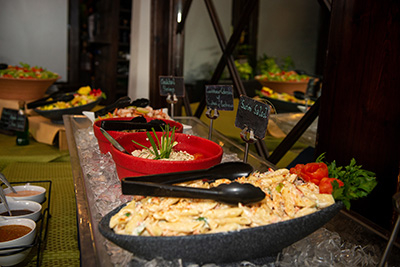 A snapshot of the food served at the Gala Luncheon. 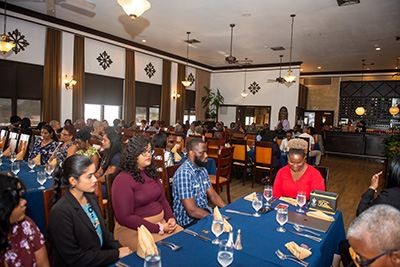 The staff of The AJL at the Gala Luncheon in January 2020.

During our Anniversary Week, The AJL celebrated students with a week of exciting giveaways - water bottles, pens, bags, as well as gift certificates redeemable for printing services at the library’s computer laboratories. On January 30, 2020, to mark the day that the building officially its doors, fifty (50) gourmet cupcakes were distributed to students and visitors to the library. Giveaways were made possible through our kind sponsors, EBSCO Publishing and Emerald Insight. 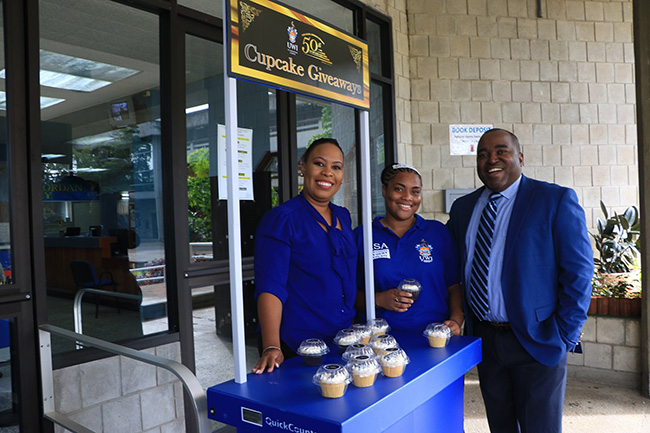 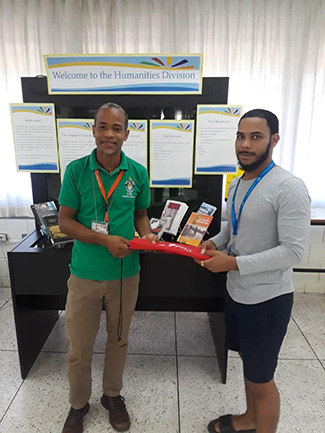 Keeno Gonzales, Library Assistant, presenting a student with a token of appreciation during the week of giveaways. 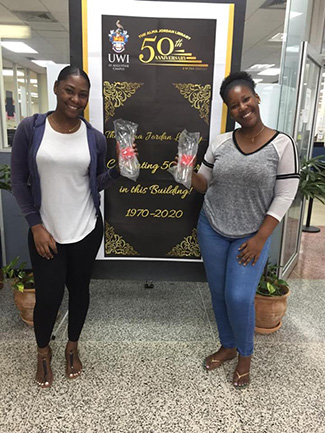 Students showing off their gifts. 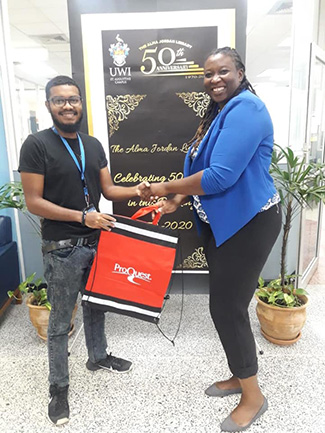 On January 31, 2020, the library launched an art exhibition featuring thirty-two (32) paintings by UWI Honorary Graduate Jackie Hinkson. The artist, who has a long history of collaboration with The UWI in the development of young artists, held an exhibition tour and two (2) workshops for the students of the Department of Creative and Festival Arts (DCFA) and interested members of the campus community. This exhibition paid homage to the key role that art plays in our cultural lives, but also in consideration of it as an integral component in the University's educational mission. The arts foster creative thinking and can help us adopt fresh and innovative approaches to current intellectual challenges and persistent societal problems.

Donald 'Jackie' Hinkson sharing with students during the exhibition tour.

To mark this important milestone of the AJL’s 50th anniversary, the library embarked on an oral history project to capture the history of its development. The project’s aim was geared to capture the memories and stories of former staff members who contributed to the development of the library. Eyewitnesses and participants in events contribute various viewpoints and perspectives that fill in the gaps in documented history, sometimes correcting or even contradicting the written record. To date, five video interviews have been conducted. Interviews were halted due to the pandemic, but will resume as soon as normal operations resume and adequate resources become available once more.

On January 28, 2020, The AJL hosted its 50th Anniversary Treasure Hunt, which required students to locate items (print, electronic, physical) in the library. The event was open to individuals and teams and had forty-one (41) participants. The winners of the competition were: 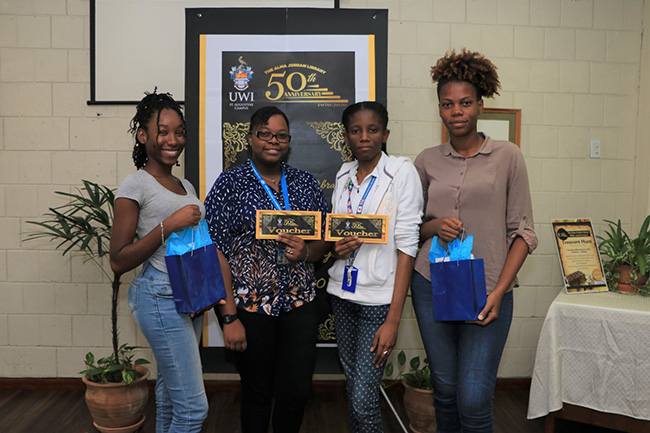 The winners of The AJL’s 50th Anniversary – Treasure Hunt 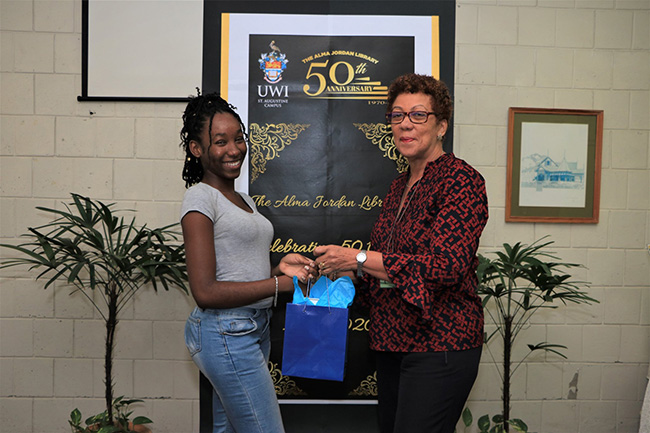 Mariella Pilgrim, Head of User Services at The AJL, presenting to one of the First place winners, Sigidi Francois. 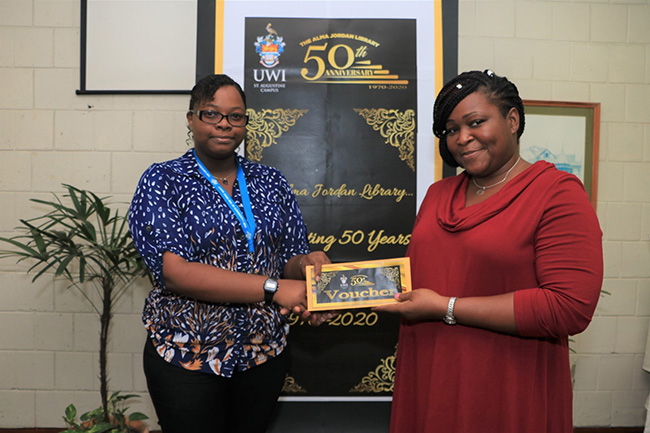 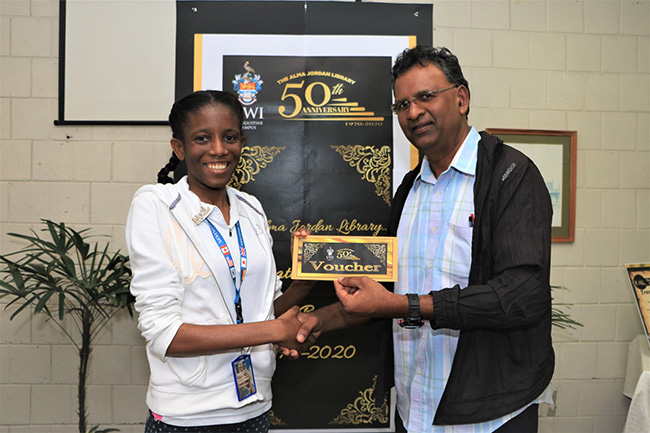 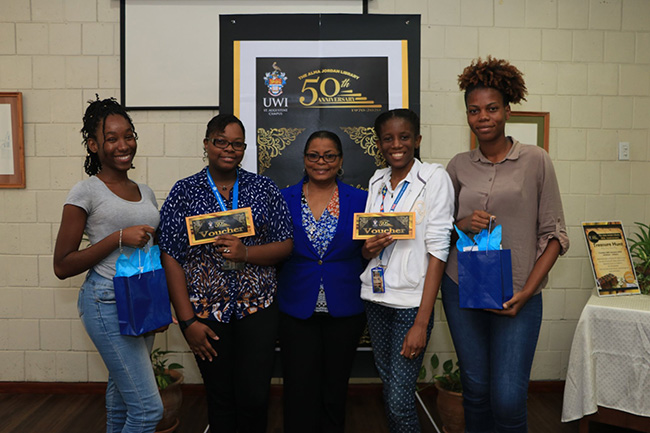 In February 2020, The AJL launched an essay competition open to students of the St. Augustine Campus. They were required students to submit a 2,000-word essay about the “Role of the Academic Library in Student Success.” Twenty-seven (27) submissions were received. Entries received impressed the judges - Ms. Dara Wilkinson-Bobb, a part-time lecturer with the English Language Foundation Unit, Faculty of Humanities and Education and Mrs. Meerabai Gosine-Boodoo, Librarian III at The AJL. The winning entries were:

The AJL continues to make learning a priority with inviting environments that help facilitate healthy learning and collaborative habits in students. This therefore leads to an overall elevation of student academic performance.

As a first year student, entering the library was very daunting. I was overwhelmed by its size and vast amount of material. Instead of seeing it as a majestic building of wisdom, I initially saw it as an overwhelming place of stress. These feelings slowly dissipated after I was shown around by the helpful staff who introduced me to the different ways to access both physical and electronic resources. 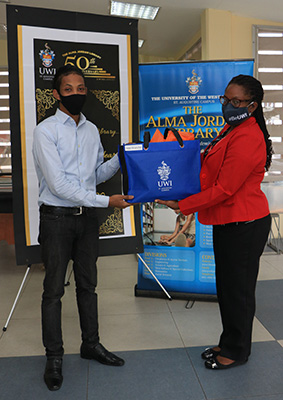 The library was indeed a safe and quiet place where I can go to relax and be productive. Thankfully I have graduated with honors and with respect to the student retention, I consider myself retained as I am now pursuing my Master’s program at the same university. 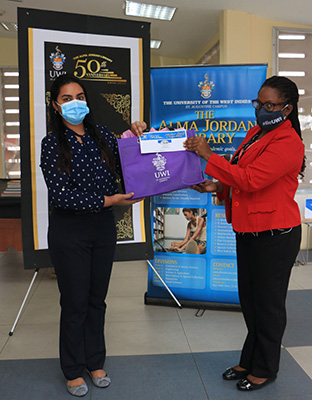 If the importance of the academic library was not fully appreciated by students before, its indispensability is palpable now that access is limited.

..despite the temporary closure of the campus, the library remains a wellspring of knowledge for my continued work on my postgraduate research.

I had a newfound reverence for the library’s archival efforts. Its collection, storage and stewardship of West Indian source materials is a tribute to our heritages and it holds enduring value for wider West Indian populations and posterity. I recognised that the academic library was the University’s fulcrum of scholarship and a comprehensive repository of the reliable sources I needed 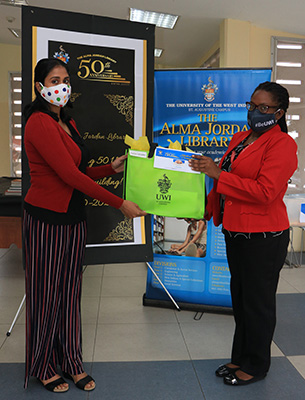 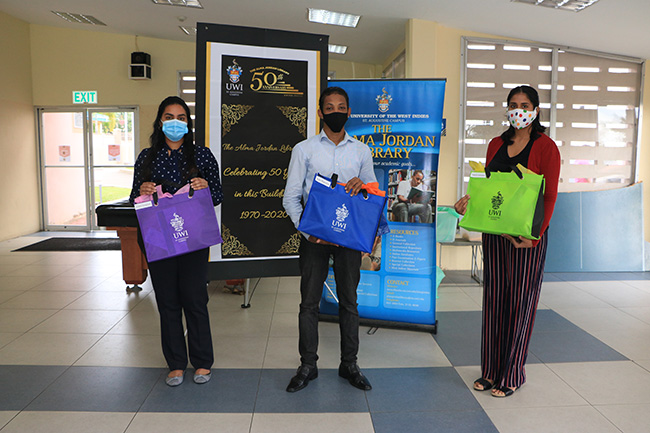 The winners of The AJL’s 50th Anniversary Essay Competition. From left to right: Omatie Rampersad, Adel Branche and Sasha Sahadeo.

Photographer: Aneel Karim
The Challenge of Change – Beyond 2020

When we began our 50th anniversary celebrations at the start of 2020, we could not have envisaged the unprecedented challenges that we would face within the year to come. The declaration of the global COVID-19 pandemic, and the subsequent lockdown of all educational institutions in the Republic of Trinidad and Tobago on March 16, 2020, served as a catalyst for change at The AJL.

Having made the transition to a powerhouse of digital information since the turn of the century, we were already providing 24/7 off-campus access to a vast array of scholarly information resources in all disciplines to all members of the university community. We now had to quickly transition the majority of our services to the virtual environment. Having previously facilitated service delivery via social media, email, and our Ask-a-Librarian interface, we now transitioned our paper-based and face-to-face services online. Highlights in this area included the introduction of a real time chat service, providing online information literacy classes and research consultations via Zoom and Blackboard Collaborate, and ramping up the harvesting of quality open access academic resources. In addition, to allow students access to the physical resources, The AJL moved its lending services to a secondary site off campus. At this site, the Library was also able to initiate a device loan service (laptops and tablets) in an effort to meet student need for connectivity.

As our nation and university contemplate this “new normal”, The AJL and its dedicated team remain committed to providing access to quality information resources. We will continue to innovate and reimagine in order to better serve our users. We look forward to the day when we can welcome back our students physically on campus… but until then, we will continue on our journey to the undiscovered country… the future.