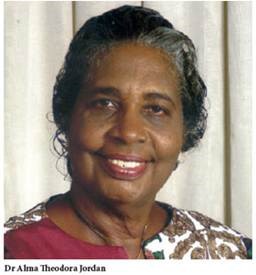 As of 28 February 2011, the Main Library at The UWI, St. Augustine Campus in Trinidad and Tobago officially became The Alma Jordan Library in recognition of the exemplary service and pioneering work of its first Campus Librarian, Dr. Alma Jordan. Dr. Jordan was Campus Librarian at the Main Library from 1960 to 1989, serving also as University Librarian from 1982 until her retirement in 1989. From humble beginnings, when the library opened in 1970, she led the development of what has become today a great repository of knowledge and information. From its holdings of print and online resources spanning various disciplines and including prestigious special collections on renowned persons such as Eric Williams, CLR James and Dereck Walcott, The Alma Jordan Library is now viewed as central to the academic enterprise that is the St. Augustine Campus of The University of the West Indies.

Alma Theodora Jordan was born in Tunapuna in 1929 and graduated with honours with a BA in Spanish from London University before pursuing library studies which culminated with a Doctorate of Library Science from Columbia University in 1966. She has written extensively on Caribbean librarianship and was a founding member of the Library Association of Trinidad and Tobago (LATT) as well as the Association of Caribbean University, Research and Institutional Libraries (ACURIL).

Dr. Jordan has served on boards and committees nationally, regionally, and internationally; and is the recipient of many medals and awards, including the Hummingbird Medal (Gold) of the Republic of Trinidad and Tobago in 1989. In 2001, she was inducted into the Hall of Excellence of her alma mater, St Joseph’s Convent, Port-of-Spain, Trinidad and Tobago.